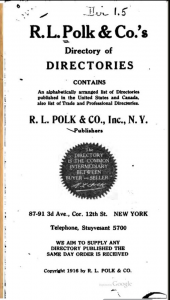 I found an interesting directory this morning. It’s Polk’s 1916 Directory of Directories. I’ve not seen other years for this directory. Under Illinois, you can see the cities with published directories. There are only five listings for the Chicago area and now there are many more. What I found most interesting starts on page 30. These listings include directory titles by occupation or industries such as Jewelers, Dry Goods, and Plumbing.
Previously I have searched a city directory by occupation or business name using the keyword field. This helped me find relatives who spelled their names differently than I expected. I’d like to locate these trade and professional directories.
Be the first to comment
Filed in Genealogy 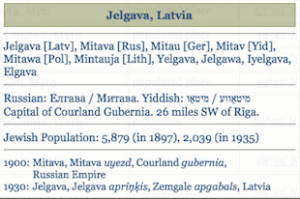 Be the first to comment
Filed in Genealogy | Tagged: history, libraries

What’s in a Name?

I began my interest in genealogy many years ago but only in ernest started being serious about it a few months ago. I had photographs, documents and records of some relatives and I had questions, so many questions. I think I am emerging from the beginner stage of this type of research. I may still make beginner mistakes, but as an experienced librarian, I hit the ground running, so to speak.

One of the first things I discovered and am still learning about is how so many name variations come to be. My surname for example, Perbohner, has also been spelled with no letter ‘h’. The spelling with an ‘h’ is the German spelling, and without is Russian as there is no letter ‘h’ in the Russian alphabet I am told. So that’s what I knew, two ways to spell it.

What I actually found so far with spelling variations includes Terbohner, Parboner, Proboner, Porboner, etc. Maybe one half of all of my ancestors with my surname have at least one record with a spelling alteration from transcription or pronunciation recording errors. And then I learned through a document a relative wrote around 50 years ago that two brothers, Jacob and William, changed their surnames before they came to the US. They originally used the surname Bernhardt and soon after dropped the letter ‘t’. And their parents sometimes used the name Bernhardt. And other males adopted the name as their first name, with or without the letter ‘t’.

I wondered how they chose one particular name over another? Why would they do that, what did it mean? From what I understand today is that Jews did not adopt permanent family names until the 18th and 19th centuries when the adoption of permanent surnames in the German States was compulsory. An encyclopedia from 1906 explains part of the situation this way, “In Germany the tendency to adopt Christian names was perhaps most marked, such names as Bernhard,…” This story I am learning is not only of my family, but of history as well. And it’s being revealed to me piece by piece.

I’ll likely post again about this name issue. It’s a BIG one.

Be the first to comment
Filed in Genealogy, Jewish History | Tagged: names

That I am researching genealogy and family history in a new level for me, I’m not surprised to run across jokes.  Take this one for example that I recently saw in a posting on the genealogy.stackexchange forum:

I began doing some history on my family, genealogy and research years ago, ten perhaps. At some point in the last few months, I became ‘serious’  about this effort. And at the same time, I discovered that as I was finding out about the lives of my ancestors, I was finding myself in the process.

It’s not like I’m found now and in some sort of fixed state never to change again. I often get inspiration and am energized by others. Today I find inspiration on a blog titled I am and I am Not by Esther Cohen. She writes in the here and now about what is in front of her, what she looks like as she imagines what another sees, and what flow through her.

I’ll start blogging this research experience. Perhaps you will benefit from my research trails and trials. And family too may be interested in what I uncover, the hows and whys. This is a perfect task, the research that is, for I am an experienced librarian!

There are stories somewhere in my ancestry, lives and loves lived and lost. And new beginnings. As I dive into the history of family members, it changes me and becomes my story too. I hope you enjoy it. Feel free to make it your story too. You can add details about my family (private email is just fine), post your own relevant stories or tips. And recipes, oh, do share with me your family recipes for all to share and enjoy!

Be the first to comment
Filed in Blogging, Genealogy